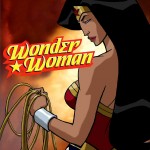 The whole DC Universe catalog is magnificent and ‘Wonder Woman’ (2009) is no acception to the rule. The big budget, summer blockbusters should be adopted directly from these stories (and tone down the cgi a bit). Superman was terrible… I digress…

No long discussion on this one other than to say that the all-star cast is amazing and this is a great vision of the character’s origin story.  Hey, it’s Wonder Woman, what more do you need…

As a picture is worth a 1,000 words… Wonder Woman in pictures… (Chronologically 🙂 )

OMG! Someone sent me the unaired NBC “Wonder Woman” pilot from 2011 starring Adrianne Palicki. It was without a doubt the worst 41min+41sec I have spent in recent memory (& I remember the cheesy reruns from the late 70’s, early 80’s). Holy crap, to think they could screw it up any more. This makes the Bionic Woman update look like Miami Vice! No kidding!…