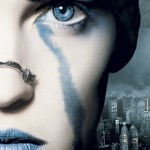 This is a really unique and interesting look into the future. The early CGI is a bit stingy but the concept of the story is so elegant that it’s hardly a distraction. There’s a blend of human and computer generated characters throughout the movie and some very interesting creatures crawling around the city. I can’t remember how I came across it, but I’m glad I did. This film is worth the watch and if the story moves you enough, delve into Enki Bilal’s comics and graphic novels for an added level of entertainment (they’re extremely cool!)…

“In the distant future, Earth is occupied by ancient gods and genetically altered humans. When a god is sentenced to death he seeks a new human host and a woman to bear his child.”

“The movie is loosely based on the first two episodes of the story, “The Nikopol Trilogy” by Enki Bilal. The first part, “The Immortals’ Fete” (Carnival of the Immortals), was published in each issue from May to December 1981 of Heavy Metal. The second part, “The Trapped Woman” was published in the Fall 1986 issue. This movie was among the first group of movies to film entirely in front of a bluescreen with the backgrounds digitally added  later (other movies include Casshern, Sin City, and Sky Captain And The World Of Tomorrow).”

“Immortal (French: Immortel, ad vitam) is a 2004 English language, French-produced live-action and animated science fiction film, directed by Enki Bilal and loosely based upon his comic book La Foire aux immortels (The Carnival of Immortals). It was one of the first major films (along with Casshern and Sky Captain and the World of Tomorrow) to be shot entirely on a “digital backlot”, blending live actors with computer generated surroundings. The French video game studio Quantic Dream helped produce much of the cinematics.”

“The film takes place in New York City in the year 2095 where genetically altered humans live side by side with unaltered men and women, and where Central Park has been mysteriously encased in an “intrusion zone” where people who attempt to enter are instantly killed. A strange pyramid has appeared over the city; inside, the gods of ancient Egypt have judged Horus, one of their fellow gods, to cease his immortality.”

“In the city below, Jill, a young woman with blue hair is arrested. Not completely human, her tissues appear to be no more than a few months old according to an examining physician, although her physical form is already that of an adult. She also possesses a number of secret powers, including one that enables her to procreate with gods, though she knows nothing of this. Horus is given a limited time to interact with the humans of New York and procreate.”

“During his search for a host body, Horus encounters Nikopol, a rebel condemned to 30 years of hibernation who escapes his prison, due to a mechanical accident, one year early. Horus has been unsuccessful in attempting to take over the bodies of other humans; due to an incompatibility with the genetic alterations humans have undergone, the host bodies self-destruct while attempting to accommodate a god. Nikopol’s body is acceptable as it has been frozen in prison/storage and not undergone the genetic changes causing the rejections. Horus takes partial control of Nikopol’s body and starts looking for a woman he can mate with to provide him a son before his death sentence is carried out. When Horus/Nikopol discovers Jill, they become entangled in a web of murder and intrigue.”

“The final scene is the only one in which we hear actress Linda Hardy’s voice as she recites in her native French the third stanza of Charles Baudelaire’s poem Le Poison, which her character, Jill, has just been reading from the book she holds entitled Les fleurs du mal (Flowers of Evil).”

“All that is not worth the poison that flows from your eyes, from your green eyes, lakes where my soul trembles and sees itself upside down. My dreams crowd in to slake their thirst in those bitter gulfs.”

“Nikopol, who recites Baudelaire’s turbulent poetry in other scenes of the movie, provides the final lines of dialogue by completing Jill’s recitation in English. “But all that is not worth the prodigy of your saliva, Jill, that bites my soul, and dizzies it, and swirls it down, remorselessly, rolling it, fainting to the underworld.”

Enki Bilal (born October 7, 1951) is a French comic book creator, comics artist and film director. Below is some of his original work from the comic series which is the basis for this film.

And FINALLY, a few wallz 4 whatever U wish…