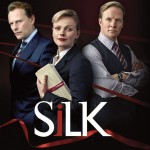 If it is the little things in life that are truly important, than it is important that you watch a little “Silk” for it is a truly wonderful hour of drama…

Once again the BBC proves itself capable of producing some of the world’s most outstanding television. “Silk” provides a unique look into the British legal system and follows the lives of some fascinating characters as they maneuver the London courtrooms and the relationships they share in and outside of their firm.

As with so many British programs each of the three series is limited to a small number of episodes (six in this case) which makes them easy to get through but also leaves one yearning for more. In any case, watch, learn, enjoy and just soak it all in. Gems like this don’t come around often enough and with “Silk” you’re guaranteed to win…

Silk is a British television drama series produced by the BBC and first shown in 2011. Written by Peter Moffat, the series follows a set of barristers, and what they do to attain the rank of Queen’s Counsel, known as “taking silk.”

The series’ main focus is on Martha Costello (Maxine Peake) and her ambition to become Queen’s Counsel as well as on her rival, Clive Reader (Rupert Penry-Jones). Martha achieves her ambition at the end of Series One, leaving Clive disappointed. He however becomes a QC in the opening episode of Series 3. The chambers’ senior clerk, Billy Lamb (Neil Stuke), also features heavily in the series.

The series’ title refers to the act of being appointed a Queen’s Counsel, known as “taking silk” due the different style of gown, usually made of silk, worn in court by QCs. It is this gown which gives rise to the colloquial reference to Queen’s Counsel as “silks” as well as to the phrase “taking silk” referring to their appointment.

Silk was commissioned by Jay Hunt, then-Controller of BBC One and Ben Stephenson, BBC Controller of Drama Commissioning, and was filmed in July 2010. It is based on Moffat’s experiences at the Bar. In an interview with The Guardian, he said “I want to tell it as it really is. The extreme pressure, the hard choices, the ethical dilemmas, the overlap between the personal and the professional, principles fought for and principles sacrificed, the Machiavellian politics, the sex, the drinking, the whole story—life at the bar is the richest possible drama territory.”

A radio spin-off following the lives of the clerks was announced in March 2014.