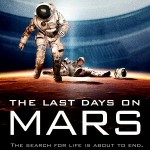 “The Last Days On Mars” is a 2013 science fiction thriller film directed by Ruairi Robinson and written by Clive Dawson. It follows a group of astronaut explorers who succumb one by one to a mysterious and terrifying force while collecting specimens on Mars.

I liked this. It’s a bit slow, the plot is somewhat simplistic and there is not the action or  suspense of an ‘Alien’ but it’s a good time. Like much of the science fiction I enjoy, the  story has its basis in science and reality. The cast is a group of wonderful actors & actresses one would hardly expect to see in a sci-fi film which adds to the overall effect of realty. Set in 2036, the science is not too much of a stretch and the primary filming was done in the deserts of Jordan which provides a true look and feel of an alien landscape. Not my favorite film but it’s definitely worth a look…

“A research crew of eight astronauts inhabiting the Tantalus Base outpost on Mars are just over 19 hours from the completion of a six month mission and a rendezvous with the lander Aurora, which is due to return them to their main orbiting craft. From there they face another six months in space before arriving at Earth.”

“The team’s main scientist Marko (Kostic) discovers samples that may point to life on the planet. Unbeknownst to the rest of the crew, he devises a ruse for one last expedition on the surface with crewmate Harrington driving a rover to the spot he had previously found the anomaly. Having obtained a soil sample with the biological agent present, he is about to return to the rover before the ground collapses and he is swallowed up by a fissure.”

“The crew converges on the scene and, although assuming Marko dead, plan to explore the pit that has been created to retrieve his body. Dalby (Warsama) remains at the scene but disappears before the team can return with the equipment they need. Led by captain Brunel (Koteas) and Vincent Campbell (Schrieber) the crevice is eventually explored and some sort of life is found to be present and growing.”

“Meanwhile Dalby and Marko reappear at the main outpost having been mutated by the Martian biological agent: they are now fast, aggressive, and zombie-like with blackened skin and no trace of their original personalities. Harrington is killed and the other crew are attacked. Brunel is hit and injured by one of the creatures, dies, and reanimates with the infection. Aldrich, who had often infuriated her crewmates, is deliberately left to die by Irwin (Harris) who emerges as the most self-serving of the crew. Rebecca is also injured.”

“Eventually three crew members flee the base in a rover with the creatures in chase: Vincent, Irwin, and Rebecca (Garai). As the group begins to fall apart it seems their only hope is the imminent arrival of the relief ship Aurora…”

The Last Days On Mars via IMDB & Wiki…