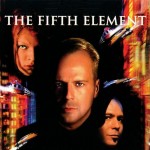 “The Fifth Element” is not only a sci-fi classic, it is a roller coaster ride, a wonderful love story and a fantastic visual treat!

I was living in Geneva Switzerland when this opened. One evening I ran into two friends outside a restaurant. “Hi” I said, “What are you boys up to?” “Oh we’re just going to a movie” they said. At that point I distinctly remember thinking to myself “why would anyone waste time inside a cinema with so much to do in such a magnificent city” before I inquired “Oh, what are you going to see?” “The Fifth Element” they replied. To which I said “Have fun. Let’s grab a drink sometime.” Then they walked off.

I didn’t watch this film until about 2004. Half way through I stopped the DVD and blurted out “OMG! I’m such a dumb-ass!!!” (for not going with them!) My girlfriend (who was watching with me at the time) looked at me like I was off my rocker. I explained and we continued with the rest of the film. Then she went to bed and I immediately watched it again, all by myself…

You absolutely must see this if you haven’t! Before the synopsis I have three little tidbits to share with you. If you’re not familiar with Luc Besson’s work, you might want to explore his films (especially ‘Leon’). Also, all the costumes were designed by none other than Jean-Paul Gaultier, which is one of the things that makes this film such a visual treat. Finally, the film has a wonderful soundtrack put together by Éric Serra. Great movie, great clothes, great music… What more could a girl ask for?…

The Fifth Element (Le Cinquième Élément) is a 1997 English-language French science-fiction film directed, co-written, and based on a story by Luc Besson. Besson started writing the story that would become The Fifth Element when he was 16 years old; he was 38 when the film opened in cinemas. It was the most expensive European film ever made at the time of its release. The film stars Bruce Willis, Gary Oldman, and Milla Jovovich. Mostly set during the twenty-third century, the film’s central plot involves the survival of planet Earth, which becomes the duty of Korben Dallas (Willis), a taxicab driver and former special forces Major, when a young woman (Jovovich) falls into his taxicab. Upon learning about her significance, Dallas must join efforts with the girl to recover four mystical stones essential to defending Earth from an impending attack.

“In 1914, shortly before the outbreak of World War I, extraterrestrials known as Mondoshawans arrive at an ancient Egyptian temple to collect from a secret chamber, for safekeeping, the only weapon capable of defeating a Great Evil that appears every five thousand years. The weapon consists of four stones, representing the four classical elements, and a sarcophagus that contains a Fifth Element in the form of a human, which combines the power of the other four elements into a “Divine Light“.”

“Three hundred years later, in the mid 23rd century, the Great Evil appears in space in the form of a giant ball of black fire and destroys an Earth battleship. As the Mondoshawans return to Earth, they are ambushed by the shape shifting Mangalores. The Mondoshawan’s spacecraft is destroyed and the only thing Earth scientists recover is the hand of the Fifth Element, which they use to construct a humanoid woman, “Leeloo” (Jovovich). Terrified of her unfamiliar surroundings, she escapes confinement and jumps off a ledge to land in the flying taxicab of Korben Dallas (Willis). Dallas delivers Leeloo to a priest named Cornelius (Holm), whereupon Cornelius learns that the four Element stones were entrusted to Diva Plavalaguna, an opera singer.”

“Upon learning from the Mondoshawans that Plavalaguna has the stones, General Munro (James), Dallas’ former superior, re-enlists Dallas and orders him to travel undercover, as a rigged radio contest winner, to meet the Diva on a luxury cruise in space. Dallas takes Leeloo with him, while Cornelius instructs his apprentice David (Creed-Miles) to prepare the temple and stows away aboard the vessel. The Diva is killed when the Mangalores attack and take over the ship, but Dallas retrieves the Elements from the Diva’s body. He fights the Mangalores to liberate the ship, killing their leader.”

“Zorg (Oldman), who was himself hired by the Great Evil to acquire the element stones, also travels to the cruise ship. Zorg searches for the Elements; he shoots and seriously wounds Leeloo, before finding a carrying case. Assuming the elements are inside, he takes the case and leaves behind a time bomb that causes the liner’s occupants to evacuate. Zorg departs on his spacecraft but discovers the case to be empty, so he returns to search for the Elements. He deactivates the bomb, but a dying Mangalore activates his own bomb, destroying the ship and killing Zorg, while Dallas, Cornelius, Leeloo, and talk-show host Ruby Rhod (Chris Tucker) escape with the Elements aboard Zorg’s spacecraft.”

“The four return to the weapon chamber at the Egyptian temple as the Great Evil approaches. The group arranges the stones; but Leeloo has become disenchanted with humanity after having come to witness the brutality of war and violence and refuses to release the Divine Light…”

‘Whew!’ Just got this one in under the wire!… I Love my blog! Nitey-Nite!…

The Fifth Element via IMDB & Wiki…