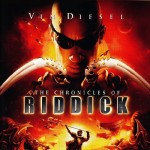 Amongst my all time sci-fi faves is 2004’s “The Chronicles Of Riddick.” From director David Twohy and starring Vin Diesel, “Riddick” packs a powerful punch of mesmerizing outer space adventure. A sweet treat from the cosmos… Convert or Die!!!

This is probably one of the three most under-appreciated science fiction films ever made! It is all around fantastic: a great story, wonderful cast (and acting), fabulous production, stunning costumes, excellent effects and a unique view of the universe and the future. Until the day I die, I will be completely unable to understand why the population flocks to the absolute crap thrown out by Hollywood in lieu of a magnificent film like this! I digress…

Five years after Pitch Black, the wanted criminal Riddick arrives on a planet called Helion Prime, and finds himself up against an invading empire called the Necromongers, an army that plans to convert or kill all humans in the universe.

“The Chronicles of Riddick is a 2004 American science fiction film which follows the adventures of Richard B. Riddick as he attempts to elude capture after the events depicted in the 2000 film ‘Pitch Black’. It is written and directed by ‘Pitch Black’ director David Twohy, with Vin Diesel reprising his role as Riddick and now also acting as producer.”

“After escaping the dark planet, Riddick has been in hiding for five years, evading most of the bounty hunters and mercenaries that are set to capture him because of his high price. His latest hideout is Planet U.V., a world lit only by ultraviolet light.”

“He evades the bounty hunter Toombs, killing Toombs’ crew and stealing his ship. He then heads to New Mecca in the Helion System, after Toombs reveals his bounty originated there. Once there, Riddick is reunited with Imam, the man he rescued. Imam believes Riddick is a Furyan, a race of warriors long thought extinct, and wants to know about his homeworld and if anyone other than himself is left. Imam believes Helion Prime is the next planet to be conquered by a mysterious force crusading across the stars. Aereon, an Air Elemental, identifies the army as the Necromongers, religious fanatics who seek to convert everyone and kill those who refuse. The Necromongers invade that very night, overwhelming the defense forces and take control of the capital. In the ensuing battle, Imam is killed and Riddick escapes.”

“The next day, the Necromonger high priest called ‘The Purifier‘ coerces the populace into converting, except for Riddick, who defiantly kills the man who killed Imam. Intrigued, the Lord Marshal orders Riddick be scanned by the Quasi-Dead, half-dead telepaths who determine that he is one of the few remaining Furyans. Lord Marshal orders Riddick’s death, but Riddick escapes the Necromonger ship and allows himself to be recaptured by Toombs. Riddick is taken to Crematoria, a harsh subterranean prison moon, where Jack, a girl Riddick rescued, was reported to have been sent. He meets up with her as the Prison Warden warns Toombs of the “Ghost Army” killing entire worlds and leaving behind dead Systems. They have various names but all seem to be aware of the threat they pose.”

“Once Riddick escapes, the Lord Marshal sends Commander Vaako to hunt him down, an easy process since Toombs’ ship left behind an easily traceable path. Vaako’s wife speaks to Aereon, who reveals that Furya was devastated by the Lord Marshal after he was told a child from that planet would kill him. Dame Vaako and her husband determine Lord Marshal wants Riddick dead, as he may be the child of said prophecy. On Crematoria, a disagreement breaks out between Toombs and the prison warden over what Toombs is owed. Word about the Necromongers has reached the prison warden, who deduces that Toombs has stolen a prisoner from the Necromongers. Meanwhile, in the prison, Riddick finds Jack, now named Kyra, and they eventually reconcile.”

“Later, the guards kill the bounty hunters, take the reward money and prepare to leave before the Necromongers arrive. Riddick leads several prisoners across Crematoria’s Volcanic Surface to steal the ship. The guards reach the hangar, just as the prisoners arrive outside of hangar doors to find the Necromongers have cornered them there. All of the guards are killed and Riddick is incapacitated by Vaako. With the approach of the vicious sunrise (from -300 to 700 degrees in seconds), Vaako leaves Riddick to die; Kyra is then captured by the Necromongers.”

By the way… For those familiar with 2000’s ‘Pitch Black‘ of for those who wish to watch the trilogy in it’s entirety, I suggest you view the animated short “The Chronicles of Riddick: Dark Fury” before viewing ‘Chronicles.’ This animated short bridges the first two film storylines. It was directed by Korean-American animator Peter Chung famous for Æon Flux.

As I mentioned, the costumes are absolutely beautiful. Check out these promo shots of Dame Vaako played by Thandie Newton…

And finally, of course, a few promotional posters for you to splash all over your various electronic devices… Enjoy…

The Chronicles of Riddick via IMDB & Wiki…