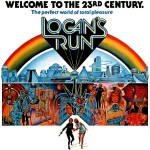 For those of us who didn’t grow up in the ’70’s it’s easy to get lost in the sea of polyester and funky-am-radio-soft-rock while overlooking some really great sci-fi! Alas, I’m here to save the day for I give you “Logan’s Run”. Carousel anyone?…

Generation ‘Y’ probably won’t recognize Michael York without ‘Austin Powers’ while Generation ‘X’ might only know Jenny Agutter from ‘Spooks’, yet the two teamed up for this classic sci-fi gem. It is true, one must overlook 1970’s ‘cheese factor’ often present in films of this decade but don’t be fooled, Logan’s Run has its place on the must see list of 20th century science fiction. The story is quite fascinating and offers a unique vision of the future. Finally, like many films of the past, it was undertaken without CGI, which in my humble opinion at least, simply adds to it’s creativity and appeal.

So dive in, strap on your disco-party clothes and head out for a night of deadly robots, unlimited free plastic surgery, plenty of liesure time activities, psychedelic dust-cloud glitter drugs, computer contolled tax-free existence and of course, lots and lots of swinging… Oh, and men in tights too…

“In the Year of the City 2274, humans live in a vast, bubbled metropolis, where computerized servo-mechanisms provide all needs so everyone can pursue endless hedonism. Endless, that is, until ‘Lastday‘, when anyone who’s 30 must submit to ‘Carrousel‘, a soaring, spinning trip to eternity and supposed rebirth.”

“Logan’s Run is a 1976 American science fiction film directed by Michael Anderson starring Michael York, Jenny Agutter, Richard Jordan, Roscoe Lee Browne, Farrah Fawcett, and Peter Ustinov. The screenplay was based on the novel of the same name by William F. Nolan and George Clayton Johnson. It depicts a dystopian future society in  which population and the consumption of resources are managed and maintained in equilibrium by the simple expedient of killing everyone who reaches the age of thirty, preventing overpopulation.”

“The film was nominated for two Academy Awards and won a Special Academy Award for its visual effects, and won six Saturn Awards including Best Science Fiction Film. It was shot primarily in the Dallas/Fort Worth Metroplex, including locations such as the Fort Worth Water Gardens and the Dallas Market Center, between June and September 1975. It was the first film to use Dolby Stereo on 70mm prints.”

“In 1977, a short-lived TV series based on the film aired, though only 14 episodes were produced. Since 1994, there have been several unsuccessful efforts to remake Logan’s Run.”

“In the year 2274, the remnants of human civilization live in a sealed domed city, a utopia run by a computer that takes care of all aspects of their life, including reproduction. The citizens live a hedonistic lifestyle but understand that in order to maintain the city, every resident when they reach the age of 30 must undergo the ritual of ‘Carrousel‘. There, they are vaporized and ostensibly ‘Renewed‘. To track this, they are implanted at birth with a ‘life-clock‘ crystal in the palm of their hand that changes colors as they approach their ‘Last Day‘.”

“Most residents accept this promise of rebirth, but some realize it is a brutal population control, and go into hiding to avoid Carrousel. These fugitives are known as ‘Runners‘, and there are ‘Sandmen‘ who are assigned to pursue and terminate them.”

“Logan 5 and Francis 7 are partner Sandmen. After terminating a Runner, Logan finds an ankh among his possessions. Later, he meets Jessica 6, a girl also wearing an ankh pendant. Logan takes the ankh to the computer, where he is told it is a symbol for a secret group who helps the Runners find ‘Sanctuary‘. The computer instructs Logan to find Sanctuary and destroy it. It then changes the color of his Lifeclock to flashing red, four years early. In order to escape Carrousel himself, Logan is now forced to become a Runner.”

“Logan regroups with Jessica and explains his situation. Together, they meet with the underground group that leads them to the periphery of the city. Logan finds the ankh symbol unlocks an exit from the city. They come out into a frozen cave, with Francis following closely behind. In the cave, they meet Box, a robot designed to capture food for the city from the outside. Box also captures escaped Runners and freezes them like artwork. Before he can freeze them, Logan and Jessica escape from the robot, causing the cave to collapse down on Box.”

“Once outside, Logan and Jessica notice that their Lifeclocks are dead. They discover that the wilderness has overrun the remains of human civilization. They explore the area, which was once Washington D.C.. In the ruins of the United States Senate chamber, they discover an elderly man. His appearance is a shock to them since neither has ever seen anyone over the age of 30. The old man explains what happened to humanity outside of the city and the fugitives realize Sanctuary is a myth. However, Francis has followed them and he and Logan fight. Logan fatally wounds Francis and as he dies, he sees that Logan’s Lifeclock is now clear, believing Logan has Renewed.”

“Logan and Jessica convince the old man to return to the city with them. Leaving the man outside, the two enter and try to convince everyone that Carrousel is a lie and not necessary. The two are captured by other Sandmen and taken to the computer. The computer interrogates Logan and asks if he completed his mission, but Logan insists “there is no Sanctuary.” This answer is not accepted by the computer, even after scanning Logan’s mind, and the computer…”

Below are some photos of the scale models built to depict the interior of the domed city: left with crew, middle pre-production and right with visual effects for the film. I am always amazed at the craftsmanship that goes into the modeling undertaken for many earlier films. To my eye, computer generated scenes lack a certain ‘essence’. One must also consider the lost tradecraft involved in building and filming the models as well as their motion and lighting effects.

And finally, a few posters and wallpapers from the film…