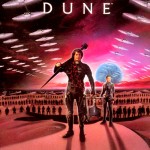 I’m so glad I chose this one! A key element of great science fiction is originality and “Dune” definitely hits the mark, it’s unlike anything you’ll ever see. It also has another hallmark of greatness – every time you watch it you’ll see another part of the story you missed the last time around…

One important note, when you set out to watch this masterpiece, be sure to find the extended director’s cut. It runs just under three hours and includes a magnificent illustrated narrative introduction that sets up the story. Let’s begin…

In a nutshell: A Duke’s son leads desert warriors against the galactic emperor and his father’s evil nemesis when they assassinate his father and free their desert world from the emperor’s rule.

“Dune” is a 1984 science fiction film written and directed by David Lynch (as in Twin Peaks David Lynch!), based on the 1965 Frank Herbert novel of the same name. The film stars Kyle MacLachlan as Paul Atreides, and includes an ensemble of well-known American and European actors in supporting roles. It was filmed at the Churubusco Studios in Mexico City and includes a soundtrack by the band Toto. The plot concerns a young man foretold as the “Kwisatz Haderach” who will lead the native Fremen of the titular desert planet to victory over the malevolent House Harkonnen.

In the far future, the known universe is ruled by Padishah Emperor Shaddam Corrino IV. The most important substance in his galactic empire is the spice melange. The spice has many special properties, such as extending life and expanding consciousness. The most profitable of its properties is its ability to assist the Spacing Guild with folding space. The spice is vital to space travel because it allows safe interstellar travel to any part of the universe instantaneously.

Sensing a potential threat to spice production, the Guild sends an emissary to demand an explanation from the Emperor, who confidentially shares his plans to destroy House Atreides. The popularity of Duke Leto Atreides has grown, and he is suspected to be amassing a secret army using sonic weapons called Weirding Modules, making him a threat to the Emperor. Shaddam’s plan is to give the Atreides control of the planet Arrakis (also known as Dune), the only source of spice, and to have them ambushed there by their longtime enemies, the Harkonnens.

Meanwhile, on the industrial world of Giedi Prime, the sadistic Baron Vladimir Harkonnen tells his nephews Glossu Rabban and Feyd-Rautha (Sting) about his plan to eliminate the Atreides. The Atreides leave Caladan for Arrakis, a barren desert planet plagued by gigantic sandworms and populated by the Fremen, mysterious people who have long held a prophecy that a messiah would come to lead them to freedom. Duke Leto soon gains the trust of Fremen, but before the Duke can establish an alliance with them, the Harkonnens launch their attack.

Leto’s concubine Lady Jessica and his son Paul escape into the deep desert, where they manage to join a band of Fremen. Paul emerges as Muad’Dib, the leader the Fremen have been waiting for. Paul teaches the Fremen to use the weirding modules and begins targeting mining production of spice. Within two years, spice production is effectively halted. Paul gains control of the sandworms of Arrakis. He has discovered that water kept in huge caches by the Fremen can be used to destroy the spice. Paul has also seen into space and the future; the Emperor is amassing a huge invasion fleet above Arrakis to regain control of the planet and the spice.

Upon the Emperor’s arrival at Arrakis, Paul launches a final attack against the Harkonnens and the Emperor at the capital city of Arrakeen…