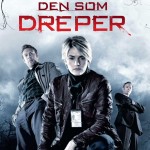 ‘Den som dræber’ (Those Who Kill) is a 2011 Danish crime TV series which follows a fictitious unit within the Copenhagen Police who specialize in investigating serial murders.

Loved, loved, loved, loved, loved this… Wow, what a treat… Laura Bach’s ‘Katrine’ has all the prerequisites; smart, tough, capable, vulnerable, damaged, lonely, alone, dedicated, obsessed, scared, sexual, defiant, driven… Her portrayal is unique and genuine set against well written stories and surrounded by a fantastic supporting cast. Plus, the insight into Danish police, culture and life is fantastic (always makes me feel like a kid!) Given, American television has some quality to it but ‘Den som dræber’ stands up to any female driven series out there, ever…

Subtitles do detract slightly from the nuance of the material, only in that one misses little things (like expressions) while reading, but this is actually a small price when you consider that the re-watch six months or so down the road will be all the better as your pick up even more of the story the second time around – like watching it for the first time-ish…

In January 2012, the A&E television channel announced that it had bought the rights to develop a U.S. version of the series. A pilot episode began filming in Pittsburgh in December 2012. The pilot stars Chloë Sevigny as police detective Catherine Jensen and James D’Arcy as forensic profiler Thomas Schaeffer. In April 2013, A&E announced that it had greenlit a 10-episode first season of the series, which would begin production in Pittsburgh in late 2013. The series will premiere on A&E in 2014.” – Chloë Sevigny is very high on my list so I have high hopes (and fingers crossed) for this remake. ‘The Killing‘ was wonderful but that was AMC, A&E is not AMC!