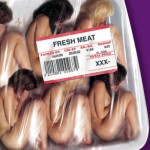 Beate Bille, Laura Christensen, Julie Ølgaard, Neel Rønhol, Sara Sofie Boussnina & Lark Winther were among the eight actresses who stood for “Fresh Meat Takeaway”. Eight of the best Danish actresses were ‘for sale’ at the big showcase in the middle of Strøget, in order to focus on the trafficking of women for the sex industry.

“I could be your daughter, it says on one of the signs that are held up against the window display of a young girl with tousled hair, smudged makeup and sad eyes, where one is surrounded by a big brand battle.”

“And she is not alone exhibited and offered for sale as a piece of fresh meat in the butcher’s window. The young girl is in fact the actor Sarah-Sofie Boussnina, known as the little sister Mathilde in ‘Lærkevej’. She has been joined by seven other younger actresses, all of whom have agreed to demonstrate against trafficking in women and prostitution.”

“Along with Julie R. Ølgaard that is the driving force behind the project ‘New Life‘, Lark Winther, Laura Christensen, Beate Bille, Neel Rønholt and Marijana Jankovic, all agreed to saturday afternoon for two hours to be exhibited in the clothes shop window in the center of the main shopping street in Copenhagen.”

“The movie ‘Pretty Woman‘ with the beautiful Julia Roberts starring helped to maintain the image of the happy hooker. But the reality situation is quite different for prostitutes. Every day selling masterminds a large number of girls and young women on prostitution in the West. The girls are often lured with promises of earning a lot of money. But once they have arrived in the West, they are forced into prostitution.”

“Julie R. Ølgaard already volunteers in a ‘Nest‘ project ‘New Lives‘. The young actress works along with other volunteers at increasing prostitutes low self-esteem so they can get out of the world of prostitution.”

“The young actress, who is primarily known from films like ‘Midsummer‘ and ‘Råzone‘, chipped in seven of her female colleagues. And there was no hesitation. They were all ready to play the role of a prostitute and stand up in a display window to make the many passersby aware that human trafficking is the third largest illegal industry, second only to drug and arms trafficking.”

“The eight young women are all dressed up as another Julia Roberts in her signature role as a prostitute in ‘Pretty Woman‘ with short, slitted dresses, deep nedringninger and punched, black stockings.

“I thought it would be cross standing there. But even if it is strange to say, it was great because we came in contact with people, and we could see that people are interested and our message penetrates to them, says the enthusiasm from Julie R. Ødgaard after she has been in the window for half an hour.”

“And it’s true. People stopped, looked interested and many even took pictures of the exhibit women while they were talking about who they would be like, and why it might have stood there. But as soon as volunteers from ‘Nest‘ or ‘New Lives‘ had stuck a folder in hand on them, people nodded in agreement.

“It makes the impression that they are there. Certainly, assures the couple Charlotte and Finn from Vallensbæk in unison. This, I think, is a good way to quicken it. It can relate to, adding Charlotte and nods reportedly towards the window where one of the girls holding a sign up with one powerless word ‘HELP‘ on.”