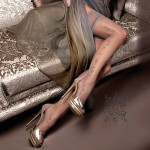 Being able to occasionally travel Europe on business has so many benefits! Among them, culture, food, people, art, architecture, history and of course, fashion! Just check out what I brought back from “Ballerina”…

I flipped out when I found a little boutique with quite a wide range of their hosiery. I was actually looking for Wolford but it was closed!!!! What? I was bummed out and then I found this little place two streets down packed with Ballerina hosiery so I just dove in! Like a mermaid on a mission! And, since my AMEX excludes any exchange rate charges, I really racked up the bonus points!