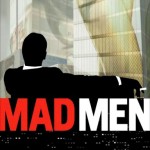 Don Draper tried everything on “Mad Men” Sunday night to land Joan. He didn’t get her. Maybe he didn’t even want her. Maybe he just wanted to know if he can still land any girl in any gin joint just by putting on his hat. 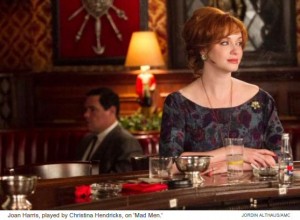 He does look good in a hat. He’s the best hat on TV these days, except maybe Matt Bomer on “White Collar.”

So there he was talking with Joan in a swanky midtown bar, with a Jaguar XKE parked outside, a colorful Christmas tree for backlighting and “The Christmas Waltz” on the jukebox. Joan’s choice, Don’s dime.

They were there because she had just been served divorce papers at the office, causing her to almost decapitate the ditzy receptionist who let the process server in.

Don, wisely and courteously, removed Joan from the situation. Pete wanted everyone to test-drive a Jaguar so the firm can pitch the Jaguar account, and Don took Joan along for the test.

They took a break in a bar, which is about as surprising as a cab driver changing lanes without signaling, and held one of the great conversations in “Mad Men” history, which is a high compliment.

Joan wondered why Don never made a move on her, wistfully musing, “My mother raised me to be admired.” Don said he was scared of her.

They picked out a man the viewer never saw and started wondering why he was trying to make a move on some girl. Joan mused about his wife back at home, whose only sin was “being familiar.”

Don said he wasn’t sure the guy just wanted a fresh new warm body. Just as likely, Don said, “He doesn’t know what he wants.”

The truth may or may not set you free, but if Don didn’t end up with Joan as an early Christmas present, he got an even better one.

For most of this season he’s been indifferent to the job that used to consume him, which is like Henry VIII suddenly deciding he doesn’t want dinner.

After his chat with Joan he went home to find Megan so angry she threw a plate of food. Not at him, but still, she threw it. He seemed mildly surprised this wasn’t just foreplay for makeup sex, that instead Megan wanted to ask him a question.

She asked if he still loved his job, which probably reflected her delayed response to a crack Don had made the night before after she dragged him to a bad experimental play where one of the characters said advertising made him sick.

After they got home and Megan said Don shouldn’t be offended by the knock on advertising, Don said, “No one’s made a stronger stand against advertising than you.”

Megan, of course, quit advertising to get back into theater.

Anyhow, he didn’t answer the question about whether he still loved advertising. He said it was different now. She said he used to love it before he met her.

Could be onto something there, Megs.

Hours later, at the Christmas party, Don told the staff the Jaguar account was the one that could put Sterling Draper Cooper Pryce on the map, and that he expected everyone to work 24/7 for the next six weeks getting a pitch together.

He didn’t say if he would be putting out milk and cookies for them on Christmas Eve, but this did sound like the Old Don, which made everyone happy.

The only shadow here was that during his conversation with Joan, Don had mused that everyone at the office missed Megan. Joan nodded even though she knew it wasn’t true. So Don may not be the office compass any more.

We learned who’s definitely not the office compass, however. That would be Lane, who in truth has always been a bit squirrely.

He learned he owes the British government $8,000 in taxes, and unlike Don, he doesn’t carry that kind of balance in his checkbook.

So he talked the bank into giving the firm another $50,000 credit and announced to the partners this is a surplus that can be distributed as Christmas bonuses.

Which would give him the eight large.

Unfortunately, the other partners decided their bonuses should be deferred.

So Lane moved to Plan B, which was forging Don’s signature on a company check.

At some point, it’s safe to say, that could put a lump of coal in his stocking.

The night’s other big news involved Harry, who got caught in a bizarre and hilarious subplot about Hare Krishna. See, you’re laughing already.

Paul Kinsey, an ad copywriter last seen washing out, resurfaced as a Krishna who invited Harry to a session so he could slip Harry a spec script for “Star Trek.”

The scripts sucked, but Harry was intrigued by Paul’s sort-of girlfriend Lakshmi, a former junkie and hooker who has discovered Krishna.

Happily for Harry, Lakshmi showed up in Harry’s office and practically raped him, though he was a willing victim.

Harry was still enjoying the afterglow when she called him a jerk and said all she really wanted is for Harry to tell Paul the script sucked so Paul will give up this secular foolishness.

Harry responded by telling Paul the script is great and giving him $500 and a plane ticket to L.A. to pursue a career as a scriptwriter.

We didn’t see much of Peggy and we saw nothing of Betty or Sally.

But Joan felt admired and Don remembered what he wanted before he mostly wanted Megan. And an E-Jag only cost $5,600. Could be a merry Christmas after all.