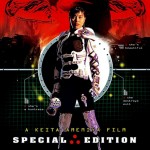 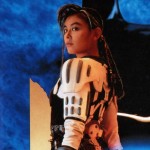 No doubt this has a certain “cheese” factor about it (in a not so much Godzilla way) but anyone who appreciates quality (and unique) science fiction entertainment will easily see through the shroud and recognize how truly wonderful this film really is.

Basic premise here: alien bounty hunter (Iria) comes to earth with her super-computer partner (bob) to trap an indestructible, inter-galactic criminal (Zeiram), traps two electricians (dumb & dumber) in an inter-dimensional void, has to put out some whop-ass and all kinds of hell breaks loose… Oh, did I happen to mention that she kicks a lot of strange alien ass?!… Sit through this as it’s well worth the effort. Zeiram is unique and timeless…

“Zeiram is a 1991 Japanese film in which the bounty hunter from another planet named Iria (Yuko Moriyama) comes to Earth to do battle with Zeiram, an immortal alien creature. Along with two ordinary Japanese electricians, she and Zeiram become trapped in an artificial dimension called “the Zone”, and have only a limited amount of time to finish their battle before the zone collapses and everyone is destroyed.”

“Zeiram is an alien of unknown origin. It appears to be a very large, imposing humanoid wearing a wide, circular hat and a ragged cloak, and its appearance is usually accompanied by an eerie chant. However, its true form is actually a small “Noh”-like face on its hat. This face is its only weak point; the rest of the body is almost indestructible and regenerates quickly as long as Zeiram is able to feed, which it does by extending the little face on the end of a fleshy tentacle to take bites out of people. By doing this, it also absorbs the genetic material of its victims, which it uses to generate smaller, weaker monsters to do its bidding. These monsters seem to be partial clones of whoever’s genetic material was used in their creation.”

“Zeiram itself is able to change its own form to a large degree, and appears in many different forms throughout the series. It can produce many different weapons such as guns and swords from its body, although these are probably weapons taken from its victims and stored inside itself. In addition to consuming organic tissue through its core, if it sustains enough damage, Zeiram is able to ingest a victim’s entire body, keeping that person alive for some time inside itself while it digests them, regenerating itself and drawing on their genetic material and even their memories to create more advanced clones.”

The film Zeiram was followed by a 1994 sequel, Zeiram 2, as well as a 1993 original video animation (OVA) prequel miniseries called “Iria: Zeiram The Animation” and two videogames, Hyper Iria and “Zeiram Zone“.

“Iria: Zeiram the Animation” is a six episode original video animation (OVA) anime series produced by Ashi Productions and directed by Tetsuro Amino. The series serves as a prequel to the original live-action film Zeiram, taking place several years earlier when the female bounty hunter protagonist Iria is still a rookie and detailing the events surrounding her first encounter with the unstoppable Zeiram.”