I’ve read the Wall Street Journal every day religiously since university. It feels natural to me. Oh snap, in today’s issue was a nice little piece on bodysuits. Alas, I just happened to be prepping a post on the very same… 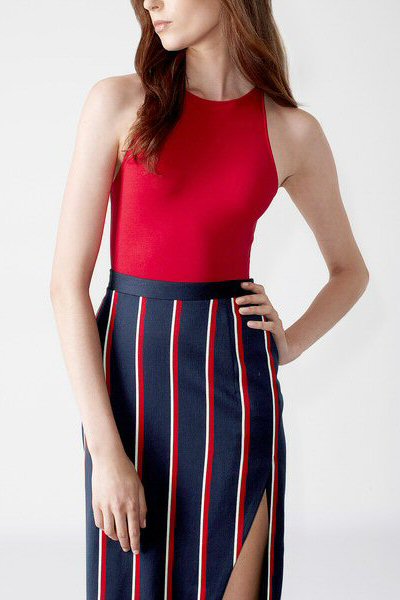 “I HAVE OBSESSED over fashion personally for about three decades and professionally for nearly two. Been there, worn that. So the odds of my having a complete epiphany about a category of clothing seemed as slim as a teenage model. Until recently, that is, when I pivoted an entire 180 degrees on the subject of bodysuits. You might say that I pirouetted elegantly since a good bodysuit makes you feel preternaturally graceful, but I’m getting ahead of myself.”

“Growing up in the 1980s and early ’90s—which about covers the bodysuit’s heyday—I had always regarded the piece suspiciously. It was a sartorial oddity only slightly less icky and strange than the dickie. My question then: Why wouldn’t you just tuck in your top without making a grand ceremony of snapping it under your crotch, which looked inconvenient and uncomfortable? Even with legendary tales of the bodysuits in Donna Karan’s ground-breaking, woman-friendly 1985 Seven Easy Pieces collection and Joan Didion’s functional, bookishly chic uniform, it’s a prejudice I held onto.”

“However, a few months ago, while I was interviewing a couple of new designers whose small collections included bodysuits, the tide began to turn. My curiosity was piqued. I’m a frequent tucker of tops, and, as someone with a smaller waist and bigger hips, I love wide-leg trousers and flaring skirts, both with high, trim waists. These call out for a lean and mean look up top. Suddenly I couldn’t get my hands on a bodysuit fast enough. When I finally did, I experienced a true “Eureka” moment. My question now: Why on earth did it take me so long to discover the charms of the bodysuit?”

Photos: A Selection of Women’s Bodysuits

“The answer is partly that it’s literally a secret weapon. “The funny thing about bodysuits is that they can’t really be a trend because you can’t actually see them,” said Net-A-Porter buying manager Sasha Sarokin. However, Ms. Sarokin noted that bodysuits have recently become more popular as looks that pair well with them, like tailored jackets and slim pencil skirts, have trended. “[The bodysuit] is incredibly unsexy in our ‘index shot,’ which is the flat still-life on the site,” said Ms. Sarokin. “But once you click to see the full outfit—if we saw that woman walking down the street, we’d say, ‘Wow, she’s got it together.'”

“And isn’t that what we all want? On my maiden bodysuit voyage, I wore a sporty, sleeveless black cotton American Apparel APP +29.83% one ($32) with a flared skirt from Zara. The skirt, with its fitted waist and thin fabric, was a tucker’s nightmare; even the lightest silk tops created bunchy lumps, and were susceptible to slipping out when, say, I raised a hand to hail a taxi. The bodysuit eliminated all that hassle. Pirouettes all around!”

“It’s like this power moment,” said Claire Distenfeld, owner of Fivestory boutique in New York. “Once I started wearing bodysuits, I felt like I could literally do anything.” Or at least wear anything. Ms. Distenfeld’s own epiphany came seven years ago while she was studying in Paris. She stopped into designer Azzedine Alaïa’s shop only to discover that a bodysuit was the one thing she could afford. She took the plunge, buying a black model with sheer sleeves. “At that point I was trying to get the look for less, because you put that under anything and you were wearing an Alaïa outfit,” she said. “But then the nature of the bodysuit just made so much sense.”

“Ms. Distenfeld doesn’t currently carry any in her store. (Her personal stock comes mainly from Wolford, the hosiery company whose seamless, circular-knit styles in a range of colors are excellent foundational options.) That’s because many high-end designers and retailers seem to have a rocky relationship with the bodysuit. Aside from Alaïa and Karan, who still make them, there aren’t many designer versions. Occasionally they are seen on runways but the pieces don’t make it to stores. “I get excited when I see them in a collection,” said Ms. Distenfeld. “And then they get cancelled.” For instance, New York designer Joseph Altuzarra showed henley bodysuits for his spring 2014 collection, but they weren’t produced.”

“This has created an opportunity for smaller-scale designers who create fashionable bodysuits. Protagonist creative director Kate Wendelborn made a black cap-sleeved version ($250) this spring that sold out in a week on e-commerce site, the Line. “It was the first thing from our spring collection that sold out,” said Ms. Wendelborn. “We were shocked.” She’s doing a long-sleeve style for fall. Greg Chait, designer of knitwear line the Elder Statesman, was surprised to see his 100% cashmere, ribbed-knit bodies ($625) sell out on Net-A-Porter, which quickly reordered. And Atea creative director Laura Myers has made her neoprene Crawford bodysuit ($250) a core piece in the line because of positive response.”

“A dearth of fashion-forward bodysuits was the reason stylist Raquel Franco launched her bodysuit-only line, called Body Editions, three years ago. Ms. Franco does clever pieces like sleek knits with schoolmarm-ish collars ($435). Her line is currently sold on e-commerce site Avenue 32 and at Opening Ceremony, but she’s in expansion mode. Ms. Franco, who is based in London, said that her main challenge is to educate women who might not be familiar with the garment or think they need a perfect body to wear one.”

“To tap her styling skills, she will soon be launching her own e-commerce site with an editorial element called Body Diaries to show potential clientele how to wear them. “You have to persuade some women to try it on,” said Ms. Franco. “But then they love it.”