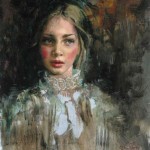 As a child I fell in love with the work of Edgar Degas. Unfortunately, works of fine art are a little beyond my budget. Fortunately though the world is filled with many talented commercial artists who make a living selling their art to the bourgeois (like me!). Recently I discovered “Irene Sheri” and have since acquired a few of her oil paintings.

Her work will never make me a fortune (that’s not why I bought it) but it does fit a style I really love. The prices range from a few thousand dollars on the low end and you can find her work in any number of fine art galleries across the nation. Also, for those not wishing to spend so much, one can purchase original replicas such as giclée or lithograph prints.

“The daughter of a Bulgarian mother and French father, Irene Sheri was born in the city of Belgorod-Dnestrovsky, Ukraine in 1968. Her diverse heritage probably makes her one of the brightest examples of a new breed of inter-cultural artists emerging from a “Europe without borders”. A mix of Bulgarian and French, she was raised in the Ukrainian city of Odessa, where cultures freely mixed, making Odessa one of the most colorful, bright and multinational cities in the world.”

“At age seventeen, Sheri was accepted into the prestigious Serov School of Fine Art in St Petersburg, Russia, and later in 1990 she graduated valedictorian after several major artistic achievements during her three years there. Two years later, she entered one of the most prestigious art schools in the world, the St Petersburg Academy of Art. This renowned school, created in the eighteenth century, has influenced many masters in its years of existence, such as Briuollov, Ivanov, Repine and Sourikov. Her graduation artwork, a painting entitled “Early Snow,” was accepted into the permanent collection at the Museum of Academy Art.”

“Sheri’s talent and style were recognized in 2001 when she was awarded Russia’s highest artistic honor, the “State Award for Outstanding Achievement in Art”, naming her as the “Best and Brightest” young artist in Russia”

“Irene Sheri’s artwork is sold and presented by galleries and dealers in France, Italy, Germany, Belgium, Russia, Ukraine, Finland, and the United States.”