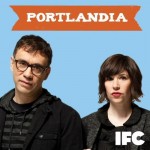 “Portlandia” is an IFC show I love. It’s about two hippies – Fred Armisen (SNL) & Carrie Brownstein – they play various characters in skits about and around Portland, OR. The show basically has no budget but it is hilarious!!!

There have been two short seasons so far with many prominent (and kewl) actors & musicians making bit appearances – I LOVE the episodes where Kyle MacLachlan plays the mayor of Portland (and the real mayor or Portland plays his assistant!).

I love Portland. Years ago I had a great friend there (his girlfriend at the time was a total flaming  BEOTSCH though!!!) Anyway, I visited him a bunch and really like the city – great people, great food, lots to do & great resale shops too!!!

Check it out: Portlandia IFC…